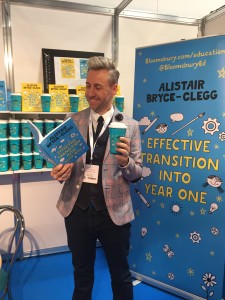 Last week Childcare Expo Manchester opened its doors for the second time for its return at EventCity. Despite the recent events in the local area, early years practitioners came together to take advantage of the exclusive site offers and discounts available.

Alistair Bryce-Clegg cut the ribbon to open the show to the eagerly awaiting guests who embraced him with hugs and selfies as they entered. They were soon granted the opportunity for him to sign his new book, ‘Effective Transition into Year One’, which is yet to be published. Alistair hosted his own seminar titled ‘Thrill, Will, Skill’ which had the audience captivated by his energy and honesty during his sell-out talk and laughter could be heard throughout the exhibition hall as he mocked what we have all experienced during our lives.

Interactive and amusing workshops ran across both days that immersed the audience in dance and music. The popular Jo Baranek from NDNA hosted her jaw-dropping science workshop that created bubbling volcanoes and piercing balloons without popping them encouraging visitors to try this at their own settings. Ollie Tunmer from Beat Goes On persuaded his audience to take part in his body percussion despite it being the hottest day of the year!

Twinkl fans were greeted with summer inspiration and the beautiful creations could be seen in the hands of those wondering around the shopping village as they continued their journey to source new resources and suppliers. Those who knew the secret phrase also bagged themselves a Twinkl lunchbox and travel mug – a popular gift among all Twinkl lovers.

The two-day event encompassed everything an early years practitioner could ask for under one roof. As the sun shined outside, the dedication and passion illuminated inside the hall and the smiles and laughter created a fabulous warm environment once again at Childcare Expo.

Keep your ears and eyes peeled for the launch of the established Midlands event in September!

Announcement: We’re back and reg is open!
Providing quality experiences for care professionals 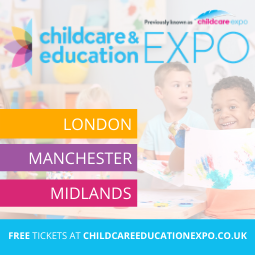